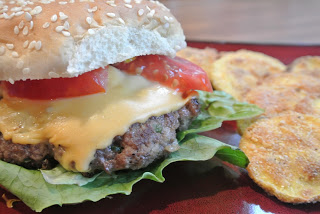 Several years ago, my husband and I discovered this local restaurant in the downtown area of Winston Salem. Just like the first time I go anywhere to eat, the menu was a little overwhelming, not because there was a huge selection, but because I always wonder what is really good. After going to the restaurant several times, I finally worked up the courage to try something that I had never eaten before in my life --- ostrich! To say I was a little hesitant would be an understatement, however, I was ready to take it on and it was highly rated by the service crew. Additionally, the ostrich was from a local farm using spent grain from the brewery. Since I am very fond of supporting local and eating what is grown around you, that made it even more appealing.
When I got this burger, I was immediately in love. It was amazing! However, like most things on menus that I come to love, after a year or so, it was discontinued because the supply could not keep up with the demand. So what was I going to do???? I decided to take the flavors of the ostrich burger and add them to a standard beef patty. The results were great. I even made slider versions of this recipe last year for a tailgate, topped them with pepper jack cheese, and served them on Hawaiian style rolls and the crew went crazy!!! The recipe is very versatile. Feel free to play with the protein used, i.e. ground turkey or chicken, and even the heat level, seeds in or out of the jalapeno.

1. Combine all ingredients in a large bowl, making sure to work until incorporated but not overworking the meat.
2. Portion the meat into 4 equal size patties, slightly bigger than the buns you plan to serve on. As the patties are formed, create a well in the middle by pushing your thumb down. By doing this, the burgers will retain their shape better and are less likely to bulge in the middle.
3. Grill over medium heat until desired doneness, flipping only once. A good rule of thumb is to watch for the juices to puddle in the well created in the middle and the meat to be cooked at least half the way up the side of the burger.
4. Top with your choice of cheese.
5. Serve on a toasted bun with desired toppings.

****Note: I would normally not seed the jalapeno, however, while pregnant, sometimes the spice can cause discomfort. The unseeded jalapeno provides a nice punch of spice. However, even the seeded jalapeno gives the burger wonderful flavor!****

Popular posts from this blog

By Amee Winters November 11, 2012
This recipe comes from one of our favorite indulgences at a local restaurant, BBQ Cheese Fries. When we were looking for a great alternative for using up some leftover pork, this is what happened. Sometimes the best ideas do come out of sheer necessity. Do not judge until you have tried! Serve them with a side of ketchup, sour cream, or extra barbecue sauce. Your taste buds will thank you! This recipe would also be great for parties and gatherings. 4 cups Frozen French Fries 2 cups Pulled Pork 3 Tablespoons Carolina Style BBQ Sauce 1 cup Shredded Cheddar Cheese 1. Prepare your fries as directed by the package but make sure to get them extra crispy. I used a deep fryer and cooked until golden brown. 2. While the fries are cooking, place the pork and sauce in a skillet over medium low heat and cover with a lid. Stir occasionally to prevent burning. Allow the meat to warm for 7-10 minutes. This step is necessary to remove extra moisture from th
2 comments
Read more

By Amee Winters April 26, 2020
Last night I cooked a large pot of lentils as part of our family dinner, which means that today, I was left wondering what I could do with all these lentils for the coming week. My typical use for lentils is in chili or soups, however, that is not something that I really wanted on this bright, spring day. Instead, I thought about how I could morph the leftovers into something new that I could use throughout the week, and that is when I thought of revamping my normal veggie burger recipe. Now, as promised, since this is the Quarantine Cooking Series, please feel free to use whatever beans or greens you have in your house. While I love the way this recipe turned out, it is more important that you use what you have and the technique to create a delicious meal for you and your family. Additionally, I like my veggie burgers on the spicy side. However, this is another place when personal modifications should be made to your palate preferences. 3 Tablespoons canola oil, divided
Post a Comment
Read more

By Amee Winters March 21, 2013
I think that when people think about potato wedges, they automatically assumed that they have to be fried in order to get the crisp coating. Here in my county, there is something called Holly Taters. These are fried potato wedges with a seasoned bread coating on the outside; these are staples at church gatherings! While I appreciate the heritage of the recipe, I find that the coating gets a little soggy and, if not eaten immediately, the potatoes taste greasy. This recipe is an adaptation from my standard oven baked wedges with an Italian twist. Your family will like these so much that you will want to make them all the time! Ingredients: 3 Large Baking Potatoes 4 Tablespoons Margarine 1 teaspoon Finely Minced Garlic 1/3 Cup All-Purpose Flour 1/4 Cup Grated Parmesan 1/2 teaspoon Salt 1/2 teaspoon Cracked Black Pepper 1/2 teaspoon Italian Seasoning 1. Peel the potatoes. Using a large knife, cut in half lengthwise and then each half into 4 wedges. Place the wedges in a l
2 comments
Read more