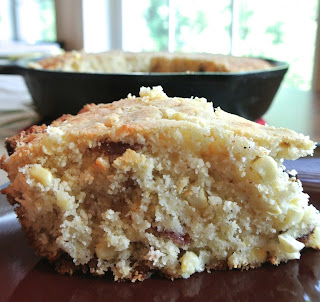 As you may know, cornbread is a staple in the South. I have very vivid memories of eating my Papa Blackburn's cornbread as a kid; he would make a cornbread laced with fresh corn kernels, chopped peppers, and cheese. It was not until I was older that I realized it was a Mexican Corn Bread recipe and not just something my Papa made......ahhhh......to be young and naive again.
This recipe is a spin on this memory. Instead of peppers, I opt for crispy bacon. However, I will say that you must still have a hot cast iron skillet for baking. You cannot get the texture without this essential tool! The addition of the bacon really does make this an all-in-one meal, even though we still just enjoyed it as the bread with Sunday dinner. My husband already has plans for Fall tailgating, camping trips, and future meals. I think that I will turn this into individual cornbreads or corn muffins. Oh, the possibilities!

1. Heat a large (10-inch) cast iron skillet over medium heat. Cook the strips of bacon until crisp. Remove to paper towels to drain.
2. While the bacon is cooking, Use a very sharp knife to carefully remove the kernels from the corn cobs. Place the kernels in a large mixing bowl.
3. Add the corn meal mix and sugar to the corn. Stir to combine.
4. Whisk together the eggs and milk. Slowly stream into the corn meal mixture.
5. Add the shredded cheese. Stir until combined.
Note: I like to use a blend of cheddar and pepper jack, however, you can choose your favorite cheeses.
6. Once the bacon is crisp and drained, chop into bite size pieces. Stir into the cornbread mixture.
7. Carefully stream 3 Tablespoons of the hot bacon grease into the cornbread batter. Stir.
8. Pour the batter into the hot skillet. Place in a 350 degree oven and bake for 45 minutes or until cooked throughout and browned on top.
Note: Oven times may vary. Bake until a toothpick comes out clean and golden on top.

Popular posts from this blog

By Amee Winters July 08, 2015
It is that time of year again when I am working to develop new and interesting ways to use up all of the vegetables coming from the garden. Last year, I posted "The Best Zucchini Bread" recipe; this is still a great recipe but this one is even better! Since entering my last trimester of pregnancy, I am craving cinnamon raisin bread. This recipe was created to help merge the two flavors while also adding in some nutrients from bananas, as I always seems to have 2 or 3 that get left over and become a little too ripe. This bread is so fragrant, moist, and delicious! If I had some walnuts in the freezer, I might even finely chop some and incorporate them into the swirl for even more texture. This bread is perfect for breakfast, afternoon snack, or even dessert. I hope you will give this recipe a try. 2 very ripe Bananas, mashed 1 cup Zucchini, grated 1/2 cup Vegetable Oil 1 Egg, beaten 1 teaspoon Vanilla 3/4 cup Sugar 1 teaspoon Baking Soda 1/2 teaspoon Baking Powder 1/4 teaspoo…
Post a Comment
Read more

By Amee Winters April 06, 2013
Ok, I know what you are thinking. Pork Necks???? Yes, yes...I was skeptical at first as well. However, as I read about the cut of meat, I found that it was often described as tender and rib-like. So, I decided to give it a try. The cut is much cheaper than any ribs I have been able to find. These turned out fall-off-the-bone and succulent. As my husband said, "This is the poor man's rib." So the next time you are at the store, just step back from what the cut says and just give them a try. They really are delicious!

1. In a small bowl, combine the mustard and seasonings to create a flavor paste. Rub the pork necks with the mixture. Cover and refrigerate for at least 4 hours.
2. Preheat the oven to 350 degrees.
3. Pr…
Post a Comment
Read more

By Amee Winters March 21, 2013
I think that when people think about potato wedges, they automatically assumed that they have to be fried in order to get the crisp coating. Here in my county, there is something called Holly Taters. These are fried potato wedges with a seasoned bread coating on the outside; these are staples at church gatherings! While I appreciate the heritage of the recipe, I find that the coating gets a little soggy and, if not eaten immediately, the potatoes taste greasy. This recipe is an adaptation from my standard oven baked wedges with an Italian twist. Your family will like these so much that you will want to make them all the time!

1. Peel the potatoes. Using a large knife, cut in half lengthwise and then each half into 4 wedges. Place the wedges in a large bowl of co…
2 comments
Read more